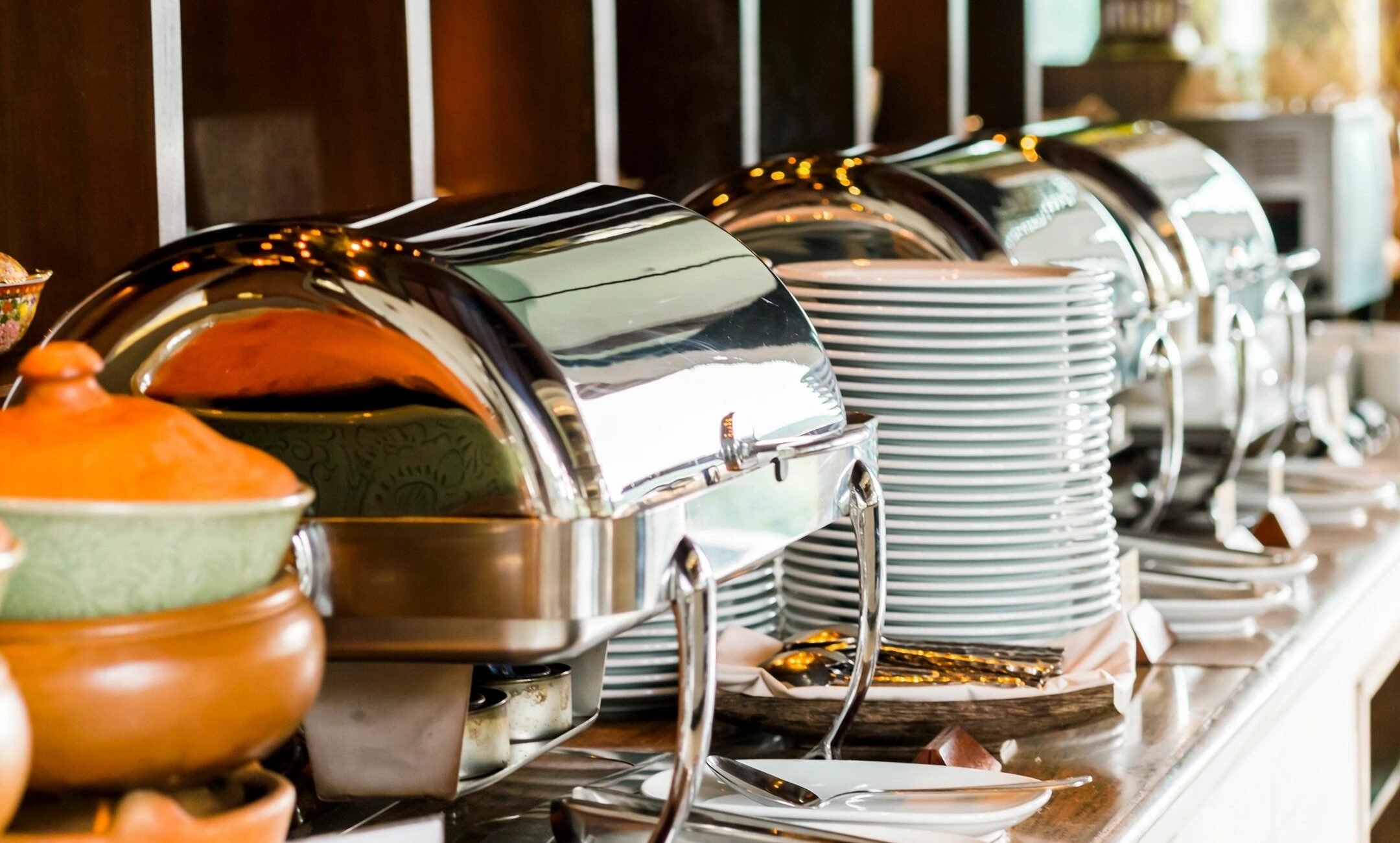 I have seen all kinds of dinners over the years; everything from the fancy prime rib dinners and amazing hor devours to something as simple as sandwiches on paper plates. Obviously, it boils down to what you can afford and/or how much you want to impress your guests.

Ordering the food enough in advance is something you will need to consider. You don't want to assume that your venue has a huge supply of everything, chances are they aren't like a restaurant where you order off the menu on-the-spot. They have to order their food in advance to ensure they have the amount you request and have it delivered in time. Plus, they need to prep and cook the food so it will be hot and ready when it's dinnertime at your reception. 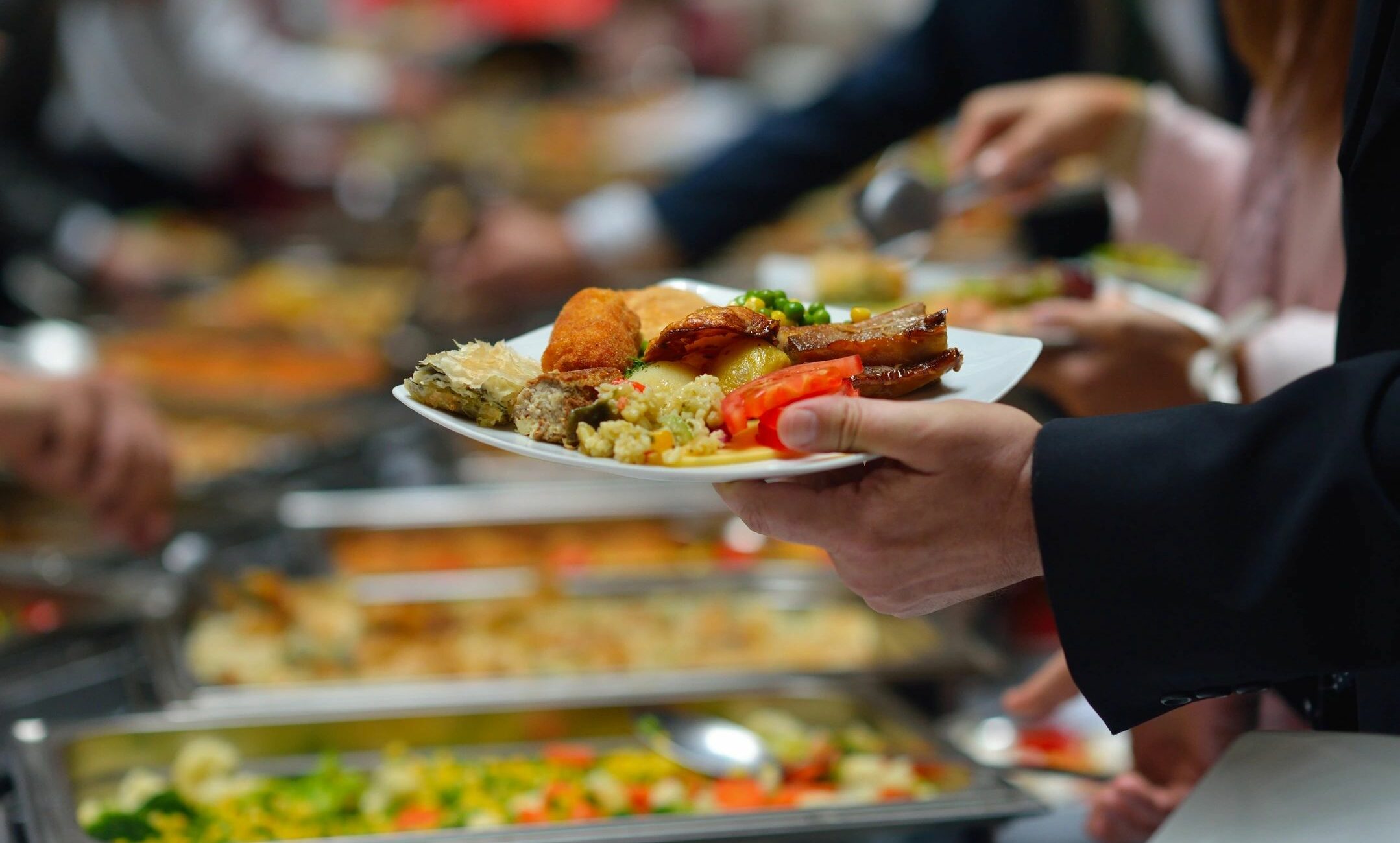 How much food should you order and how many food lines should you have at your reception?

Having enough food is important. Knowing exactly how many people are going to show up at your wedding isn't easy even with R.S.V.P.'s as sometimes guests decide not to show up and other times guests that never got back to you do show up. I suggest figuring a rough estimate and then add some more just in case more people attend is a better way to go.  Talk with your caterer and see what they suggest, as well.

While it's not common, I have been to a few weddings where there wasn't enough food for everyone and some people didn't get a full plate of food...and yes, those guests were not happy especially after waiting to get some dinner. Then there was another wedding where they realized they didn't order enough food, so they wanted the guests to only get one of the main dish options and wanted me to announce this to ensure they wouldn't run out of food. Yeah, that was a little awkward to announce, but I did it tastefully...no pun intended.

It's better to have more than enough food. This will help so everyone gets a plate of food. If there are leftovers, the guests can go through again and get seconds or you get to take home the rest of the food. A good way to help with portions at receptions is to have the venue's staff serve the food and/or be at the food line placing the food on the plates. If it's self-serve, you will most likely have guests that will really fill up their plate as though they were at an all-you-can-eat buffet. Plus, self-served food lines can take up extra time, since there are always people who take their time deciding on what and how much they want.

Since I brought up time, another good idea to help dinner go by quicker is to have several food lines (2, 3 or more) set up will help considerably! If you are having a self-served dinner, ask about having the food tables set up to where people can go on either side of it as this will help with time. Trust me, I've seen dinner lines take well over an hour or more to get everyone through and not to mention that after the full hour or more, some of the guests are just now sitting down to eat, while the bride, groom, and guests are ready to dance. 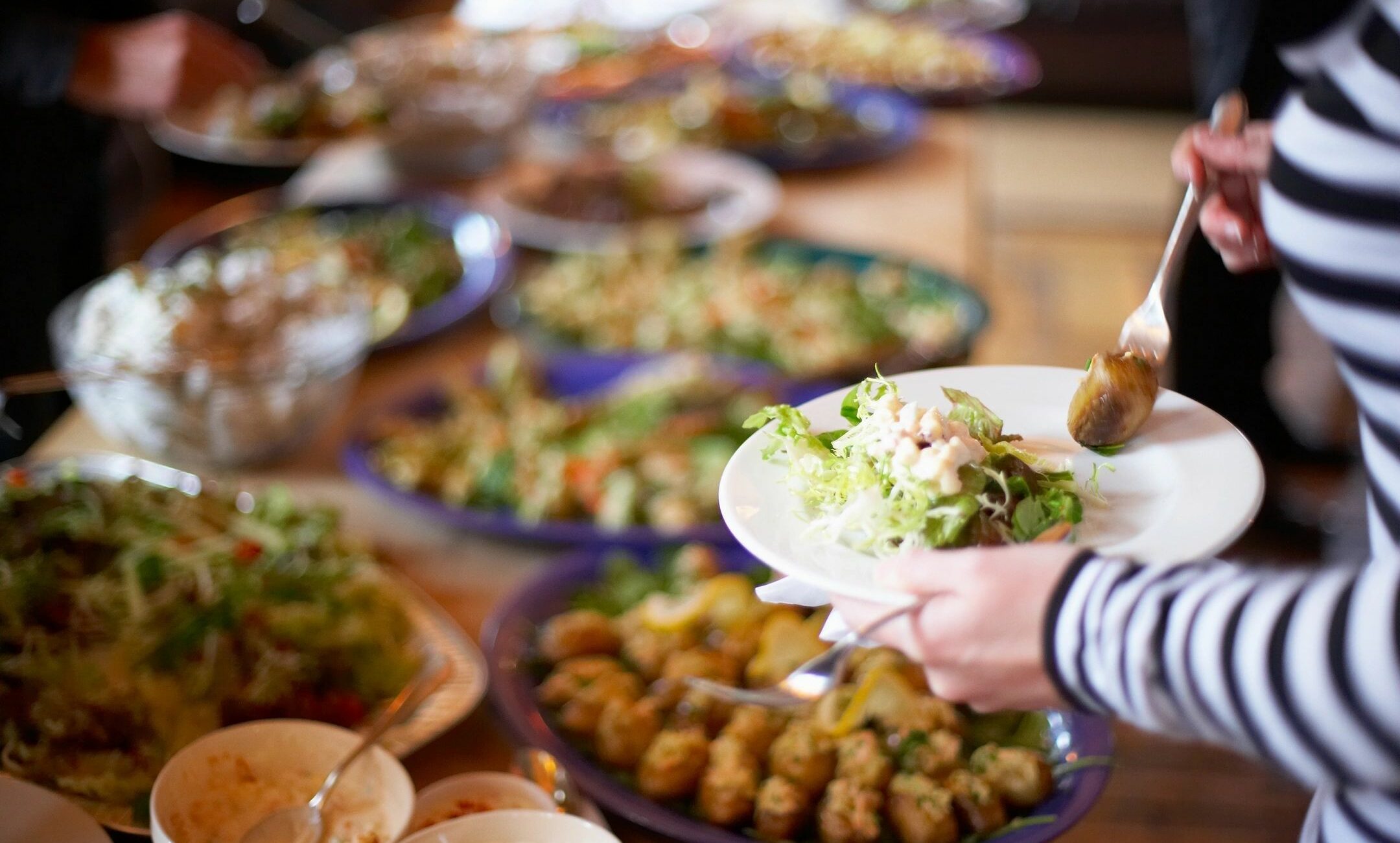 Dismissing tables or a free-for-all? 99% of the time the wedding party tables go through the food line first, followed by the immediate families/reserved tables, then the rest of the guests get to go through the line. I encourage dismissing tables one by one after the wedding party and reserved tables. This helps the flow of people getting their plates otherwise you may have a mad dash of everyone getting up at the same time and having a huge line. While 9 times out of 10 there will be those certain guests/tables that just get up and go through before being dismissed, at least if the DJ/staff is dismissing tables it will help it all run much more smooth, even if you do have a few tables that get up and cut in line.

If you are okay with your vendors (photographers, DJs, employees at the venue, etc.) getting a plate of food, please let them know. Most of the time the vendors do get to eat as well, but simply telling them that they are welcome to get some dinner is a nice gesture and much appreciated.

When there is leftover food, it's common for couples and their families to assume that the kitchen staff and/or caterer will provide leftover containers and pack up the food for them.  This is actually something you should ask before your wedding and often times gets overlooked until the night of the reception.  It is possible that you could have a lot of leftovers that would require several large carryout containers that the caterer or venue might not have available.  If you can provide containers to take the leftovers in, that would be best.  Plus, you will know which containers contain your food.

While receptions vary from one to the other, one thing that occasionally is "brought to my attention" is when guests are ready for certain things to happen. I use the quotes because I have already finalized details with each bride and groom about the order of events and a general timeline, but guests can get impatient waiting for events to happen and/or are ready to dance even though the couple hasn't even cut the cake yet!

Dinner is something that can take up a good portion of the beginning of the night and when the dinner line starts can have a big impact on the rest of the events. It is very common for the photographer to want to take pictures after the ceremony...and sometimes this can take an hour or two. It's also popular for the wedding party to go for a ride on a party bus or limo to some bars after the ceremony. These are two main examples of dinner starting later than planned, which makes the rest of the events happen later in the evening.

Some years ago I was the DJ at a summer reception which started at 6:00 p.m. The guests arrived at that time, but I was about to experience one of the most delayed receptions in all the years I've been a DJ. The bride, groom, and wedding party were getting their pictures taken offsite after the ceremony and didn't get to the venue until about 7:30 p.m. Then one of the wedding party guests had to take care of a family issue and had to leave. The photographer wanted to get some family pictures before dinner, so they were getting their pictures taken and delaying things even more. Dinner didn't start until about 8:00 p.m.

This was also a large guest list reception and it took over an hour to get everyone through the line. We still had the toasts and the cutting of the cake to take place. While I was doing my best to keep things moving along, I don't think the bride and groom realized how late it was. Their first dance didn't start until about 9:45 p.m. After their special dances, I finally was able to invite everyone else to the dance floor at 10:00 p.m. At about 10:15 p.m. I had an elderly guest come up to me very upset that I hadn't done the dollar dance yet. I tried to explain to her the delays of the events and that the dance started much later than originally planned.

So, what's a solution to making sure this isn't the case at your wedding? If you know that you are going to be gone for quite some time taking pictures or riding in a limo or party bus, plan on having the guests eat before the wedding party arrives. This may seem out of order but think of it more of out of the box with traditional plans. Since dinner generally takes more than an hour to get everyone through the food line and eat, this can significantly help your timeline move along better and give you more dance time! Yes, this isn't a common thing that's done at weddings, but I've seen this done and it is an amazing solution to getting your guests fed earlier and get to the other events of the night sooner.